What is a Container?

A container is a lightweight standalone executable package that contains everything needed to run an application, such as libraries, tools, runtime, settings, or code making it easy to deploy in VMs (Virtual Machines). It can be created as many as possible from a single Docker image

To dockerize a Node.js application, we will need to follow these steps:

What is a Dockerfile?

A dockerfile is an ingredient or set of instructions needed to create a docker image(s). It gets to build the image by running the build command.

Create a file in the root directory called Dockerfile.
First, we need to define which image we want to build from.

Here we will use version 16 of the node available as it is the current version of Nodejs as at this time this guide was written from Docker Hub :

NOTE: Above you will notice we used two distinct COPY commands to reduce the application rebuild time

What is a .dockerignore file:
It helps prevent the local module and debug logs from being copied into your Docker image when building a docker image.

Now, let's create a .dockerignorefile file so as not to copy unnecessary files to the container during its built process from the logs.

This prevents the local module and debug logs from being interrupted and copied onto your Docker image.

What is a Docker Image:

This is a set of read-only instructions that helps to build a container and makes it possible to run it on a Docker.
Building your Docker image is quite easy and can be done using a single command.

But before building it, look at the image below to confirm you have the displayed files and directories on your code editor. If you can’t or don’t have the codes.

You can fork a folder repo here from this to build yours.

Be sure to have these extensions installed so you can remotely access your docker logs and files via your Vscode just like this image below:

On the left section of this picture, you can see the Docker extension, Remote live server, and Dev container extension icons. 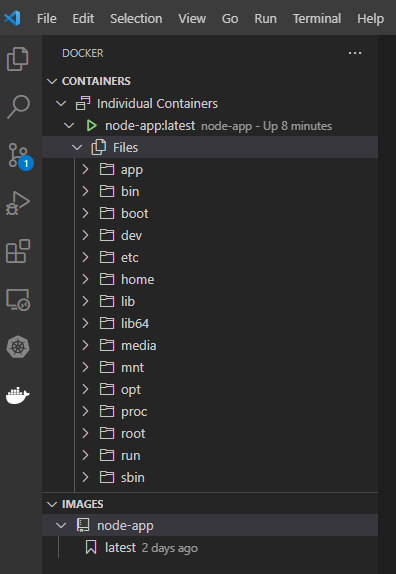 Be sure to install and download these two extensions if you are using Vscode (Visual Studio Code) so you can access your images and containers on your visual code editor registry easily.

On the left-hand side of your Vscode via the docker tab.
The docker image on the left pane of the code editor shows that it is installed as an extension and you can also access the Docker hub and Registry within your Vscode environment. 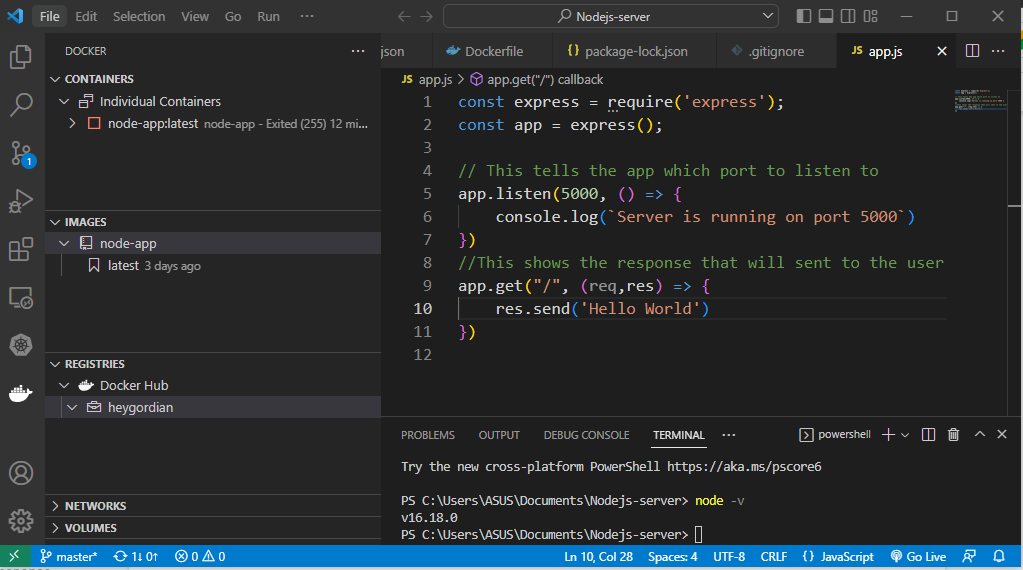 If confirmed, you can run this command on your terminal or CLI tool.

Here is an example we use in this guide: 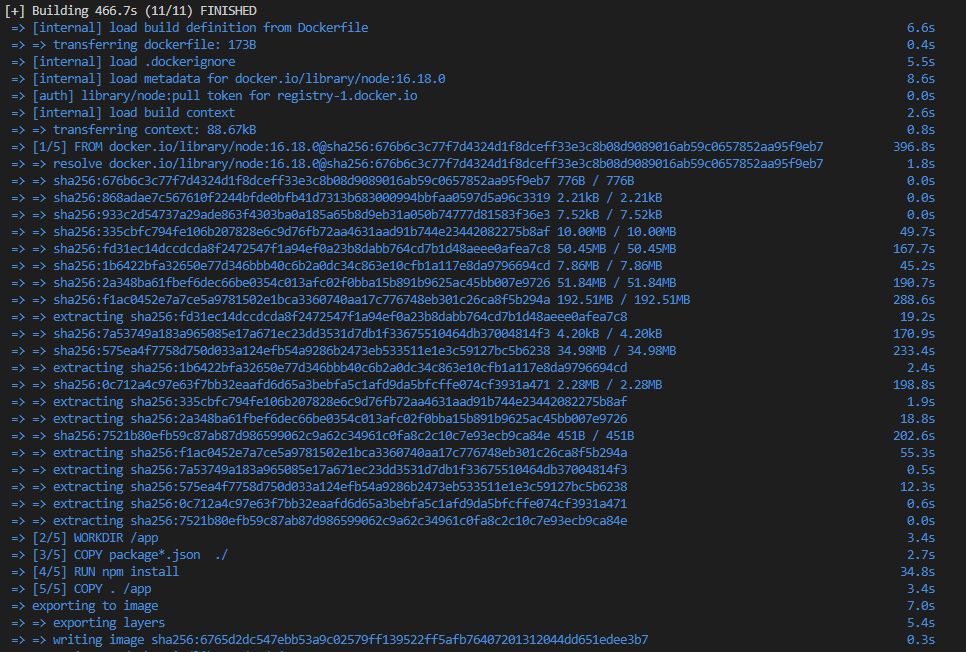 You should get something similar to the output above after executing the command.
This means that the docker image was created successfully and the app is working.

Now that the build is complete, you can check your image or your docker using this docker command below :

Here is the result:

You can see your built Nodejs docker image there.

You will need to create a container from your built image.
You can easily do that using your Docket desktop with the following steps. 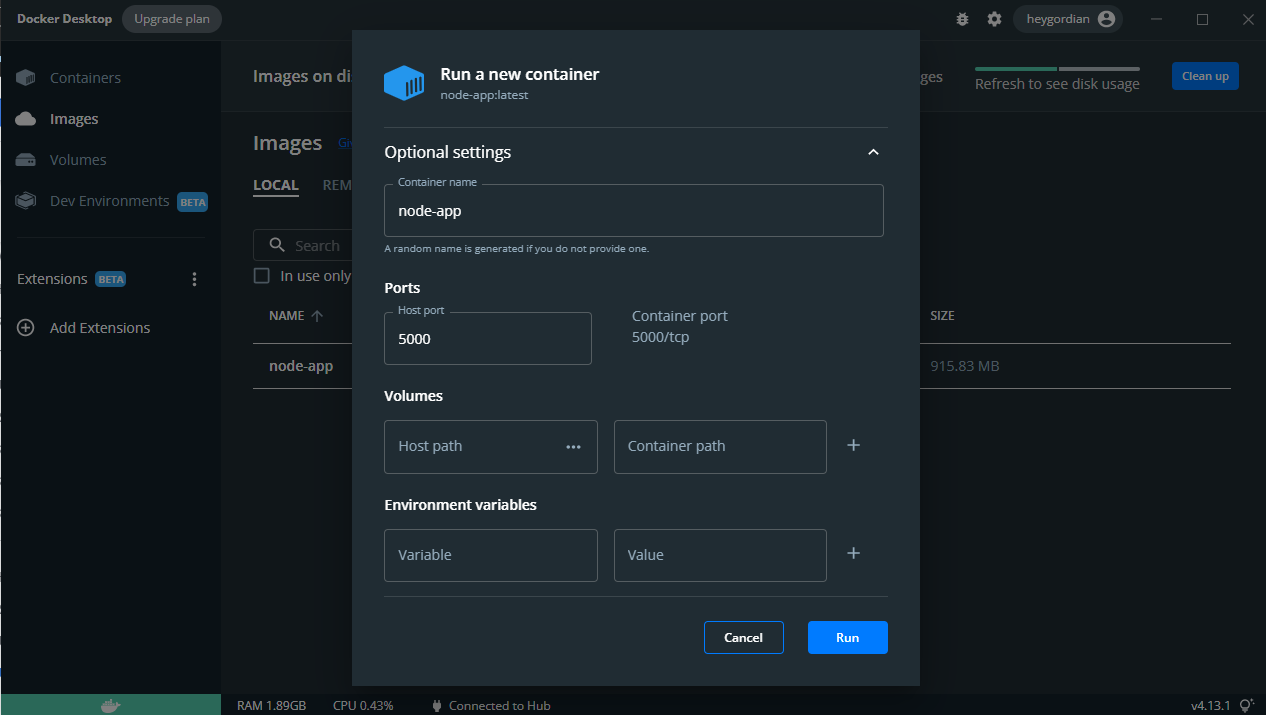 Launch Run. You have successfully created a container. You can view this via your container tab above the image tab on your Docker desktop.

Navigate to actions and choose "Logs" to view your running container logs.

Navigate to your browser and type in or paste " https://localhost:5000" to view your running container image with display message " Hello world "

Run a Container Using the terminal or command line

Do note that a container can be created as many times as you want.
Now we can run the docker image using the command:

The -d flag indicates the docker container is running in the background.

The -p flag shows which host port will be connected to the docker port.